Should children go to funerals?

Deciding whether to take your children to a funeral isn’t easy. You may worry that young children could be frightened or confused by what’s happening, or you may have concerns about the impact of the day on teenagers.

So how do you tackle the issue?

Childhood bereavement experts say many children want to be included, but how you do this will depend on your child. Find out how to explain what’s involved below, and why it’s important to let your child make that decision.

Is it ok to let children attend a funeral?

There’s no right or wrong answer – and there’s no ‘right age’ for children to go to funerals. For babies and very young children, parents and guardians will want to do what’s best for them. With older children and teenagers, the best way to find out is to ask them.

Nicola Creaser, bereavement services regional lead at Child Bereavement UK says, ‘Many young people tell us that they want to be involved. If you tell them they can’t come, smaller children imagine a funeral is either something really fun or really scary, while older children can feel left out if the rest of the family is going.’

She recommends talking to your child and giving them the choice whether to come or not. If they’re not sure what the funeral will be like, explain to them what happens – see below for advice on how do that.

Some of us may think that children should attend the funeral of a parent or grandparent, but it’s worth considering how close they were to the person who died.

Nicola says, ‘Some children will be really close to their grandparents, while others may not. Some children don’t live with their parents, so may not want to go to their funeral. It’s not so much about their family relationship, but their individual relationship with that person.’

How do I explain the funeral to them?

Before your child decides if they want to go to a funeral, you may need to explain what happens. You could start by saying that a ‘funeral is special ceremony we have after someone has died. We’re going to have a funeral for Granny, so everyone can say goodbye, share stories to remember her and show how much we love her’.

If you want to, you can include extra details such as which family members will be there, what will happen, who will speak and how long it might last. You may also want to tell them what happens after the funeral, whether that’s a burial or cremation.

Older children and teenagers may appreciate being involved in planning the funeral itself. ‘You could ask them to choose a funeral poem or reading for the ceremony, or they could pick the flowers,’ says Nicola. ‘Giving them the choice to come and decide how they want to be included is really important.’

On the day of the funeral

If you decide to bring babies or toddlers with you, ask a friend or relative to step in and look after them if the ceremony becomes overwhelming. ‘You have the right to grieve on the day too,’ says Nicola.

Older children could bring a toy or teddy bear along to comfort them during the service, and teenagers may want to bring a good friend. ‘Tell them that they will see people crying, but that’s okay as a sad thing has happened,’ says Nicola. ‘But you can then talk about the wake, where people might be laughing and drinking and really celebrating the person who died.’

If your child doesn’t want to go to the funeral, they can still be involved in planning the day. For example, some families are choosing to have a coffin decorated with pictures or messages, so your child can pick which photos they’d like and write a personal goodbye. They could also help you choose the flowers or songs for the ceremony. 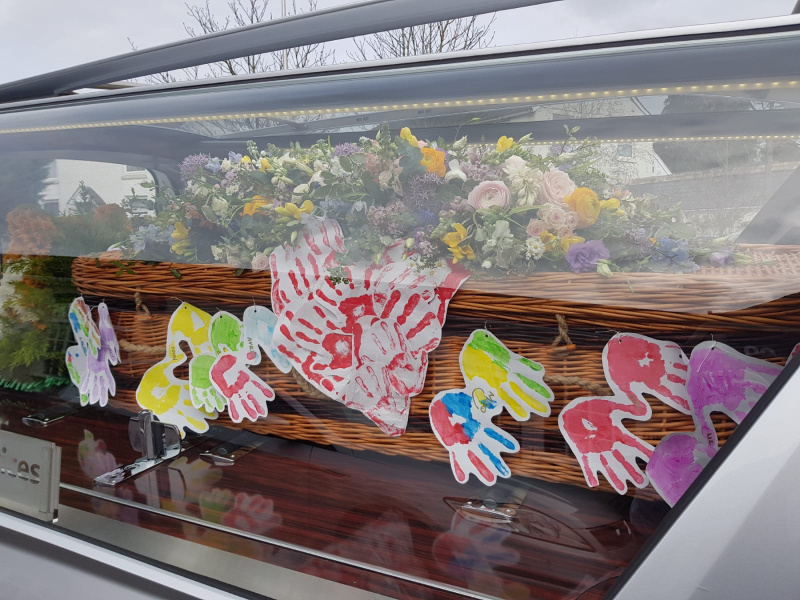 You could ask to have the ceremony recorded, so you can share it with them when they’re ready, or you can involve them in scattering the ashes. Nicola says, ‘You might also want to hold a small memorial at a later date. The idea is to create a memory for them of saying goodbye that they currently don’t have.’

Whatever you decide to do, it’s ultimately your child’s decision whether they want to be involved. Experts say most of us never regret going to a funeral as a child, but many resent never being asked.

• For more help and advice, see our guide to bereavement support for children

• A useful book for young children is What Happened to Daddy’s Body by Elke and Alex Barber (£11.99, Jessica Kingsley Publishers)


Talking to children about bereavement