From Christmas in July to a send-off fit for a superhero, personalisation is proving to be a growing priority for Brits when planning a final farewell.

The rise of personalised funerals

It’s not just the ceremony people are personalising as we revealed Brits want to arrive in style. Over the last three years, we've seen the number of requests for unique hearses increase by a fifth (21%)*. These range from a Rainbow hearse to land rovers to a hearse showered with 100 red poppies.

Further highlighting a trend of Brits moving away from traditional funerals, our biggest ever survey into death, dying and bereavement, conducted among 30,000 Brits, reveals that two fifths (41%) would like their funeral to be a celebration of life, rather than a sad occasion. A further one in five (20%) want mourners to wear bright colours at their funeral.**

Marking this trend, here are some of the most unique tributes conducted over the last 12 months:

Magician Funeral – carefully tailored, right down to the red noses, this funeral celebrated the life of a magician. Unique touches streamed throughout the service including our rainbow hearse and a coffin printed with a deck of cards, this funeral was like no other. Furthermore, the family opted for a broken wand ceremony. During a magician’s funeral, a ritual is performed in which a wand is broken indicating that the wand is no longer needed as the magician has passed away. 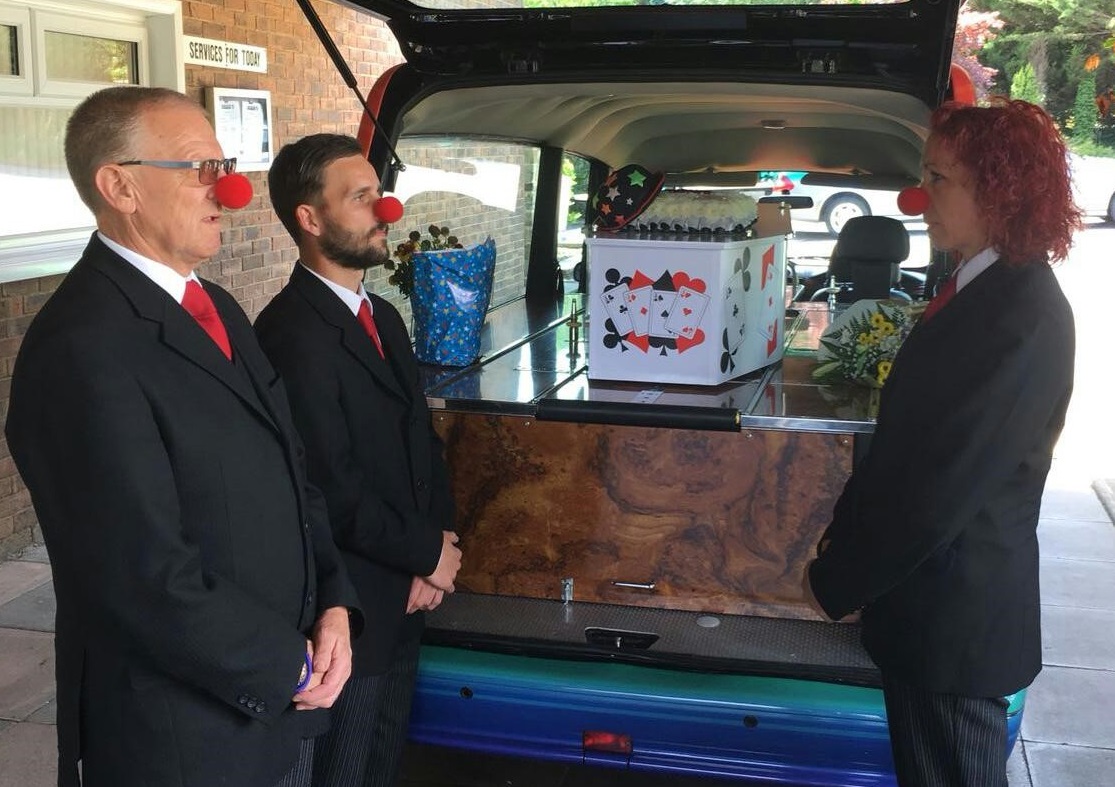 Fancy Dress Funeral – With Scooby Doo, Kevin the Minion and a Ninja Turtle in attendance, this funeral was a real representation of a fun and high spirited individual. With the Funeral Director dressed as He-Man, guests included Elvis Presley, Red Riding Hood and a Medieval Punk Rocker.

Only Fools and Horses Funeral – A send-off fit for a comedy enthusiast, this funeral was based on popular TV show, Only Fools and Horses. The family wanted spirits to be high and the funeral to have the fun factor so chose to use the Reliant Regal hearse.

Christmas in July – with Santa, Rudolph and Santa’s little helpers in attendance, this funeral gave the best send-off possible for a Christmas lover. In the heat of the summer, family and friends came together dressed in Christmas jumpers to celebrate the life of their loved one.

McDonald’s Funeral – This ceremony was for a teenager who was a huge fan of McDonald’s. The funeral precession drove via the local McDonald’s, through the drive through and parked in the car park to allow family and friends to let off balloons. After the funeral, the family returned to the fast food restaurant for the wake – a place where the teenager spent a lot of his time with friends and family.

David Collingwood, our Director of Funerals, commented: “We all lead unique lives and our final goodbye should definitely reflect that. Personalised touches don’t need to be extravagant – it can be something as small as changing the funeral directing team’s ties.

“The trend really highlights the importance of planning ahead and having conversations with our friends and family about our wishes. Not only so that we take our final journey in the way we would’ve wanted, but also to alleviate some of the pain for our grieving families by removing those important decisions when the time comes.”