Guidance for funerals has recently changed, giving you more choice and allowing more people to attend.
Find out how we can help.

Meet the team at Chippenham Funeralcare

We find that many of our colleagues come to work with us because they’ve experienced a loss and want to make the time easier for others. This is true of Rachel Clarkson from Chippenham, who was inspired after the loss of a friend and the help she found in bereavement groups. We spoke with her about her journey to Funeralcare.

What made you want to go into the funeral profession?

A friend of mine died in 2005 and was helped enormously by bereavement charities. I looked into these bereavement charities and decided to undertake a bereavement course initially to see whether I was the right person to help others. Along with going to regular funerals with my father, of aging relatives, I became fascinated with the role of the funeral director. I became a Cruse Bereavement Volunteer and after being made redundant, decided that the fulfilment I got from helping bereaved people was something I wanted to capture in a job and from there the story started.

Do you have any advice for anyone wanting to get into the industry?

Yes, the job emotionally takes over your life sometimes, but the joy of helping people in their hour of need outweighs everything.

How do you feel about your role?

I enjoy my job. Seeing new faces, getting to know them and helping them plan the best goodbye we can for their loved ones. Sometimes it's the small things that can have such a lasting effect on the family – in a positive way.

Are you still involved in any bereavement groups?

I run a Bereavement Support Group in the local town hall, twice a month and recently I have got a quorum of regulars who are also meeting outside of the group and attending other local activities.

What’s your most memorable funeral?

A funeral for a lovely local lady who loved colour and ‘bling’. The horses’ drapes and feathers were matched with the flowers and the clothes people wore for the service and there was a spangled shoe placed by the coffin in the crematorium. 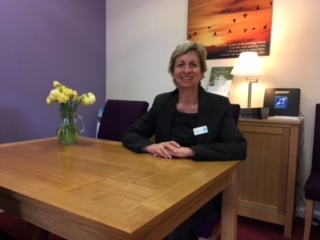